The Oblivion Scythe is a fast-hitting, AoE (Area of Effect) magic weapon. It is extremely potent in combat situations where you are facing multiple enemies. It is much more powerful that its stats let on; it has a built in spell which deals massive amounts of damage.

This item can be obtained in the following box:

Currently, it is dropped by the following boss:

It can also be obtained from the following shop:

At the moment, the price of Oblivion Scythe is roughly: 1M-5M DScoins 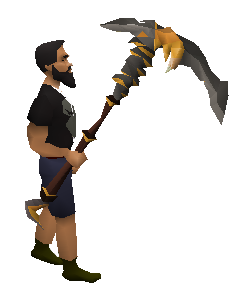 Retrieved from "https://dreamscape317.fandom.com/wiki/Oblivion_Scythe?oldid=44567"
Community content is available under CC-BY-SA unless otherwise noted.