It is completely different from all other raids and is much, much more challenging.

The raid is multi-combat, and you will be facing multiple high-leveled enemies all at once! Here is a quick run-through of what you can expect to come across during this raid: 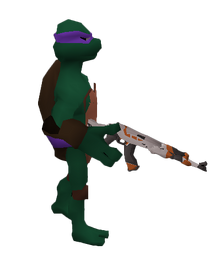 Donatello has 200,000 HP, and he cannot be attacked with magic. He is able to drain your prayer while attacking attacking you. Getting Donatello down early is important so you can continue to use prayers against the other three turtles. 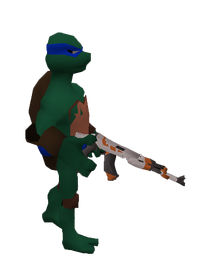 Leonardo has 200,000 HP, and he cannot be attacked with melee. He is able to turn any food in your inventory into rotten food, rendering it useless. If your strategy doesn't rely on food, you shouldn't have to worry much about him. 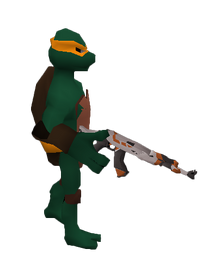 Michaelangelo has 200,000 HP, and he cannot be attacked with ranged. He will heal himself back to full health the first time that he reaches half health. He doesn't have any effects which directly negatively affect the player and so he shouldn't be worried about until the end. 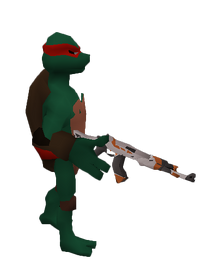 Raphael has 200,00 HP, and he will rapidly change which attack styles can damage him. The attack style he is invulnerable to will change roughly every 5-10 seconds. He also has a special attack which will instantly reduce its target to half health. He should be prioritized immediately after Donatello. 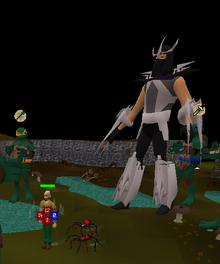 Shredder is the final boss in the Ninja Turtles raid. He has 1,000,000 HP, and like Leonardo, he will turn any food in the player's inventory into rotten food. Once Shredder reaches half-health(500,000 HP) and quarter-health(250,000 HP), he will re-summon all of the turtles. Once this happens you must stop attacking him immediately, for any damage dealt will only heal him. All the turtles must be killed again before Shredder can be finished off.

Once Shredder has been defeated, the raid is over. The top three damage dealers will receive rewards, as in all other raids. The rewards include some brand new items, shown below. For a full drops list, see the Shredder article.

The Space Virtus Set is a new, best-in-slot magic set. It offers massive bonuses to all defensive categories, as well as a huge magic accuracy and a ridiculous +320% magic damage bonus.

These three spirit shields are new, best-in-slot offhands (Except for the purple mist, which is second-best for ranged). They offer reasonable defensive buffs and a nice prayer buff, but most importantly they sport massive melee, magic, and ranged strength bonuses respectively. They are also textured very uniquely, offering the player a chance at some great, rare feeling gear. The shields are currently untradeable.

Lastly, the Acidic, Lava, and Inferno H'ween Masks. (In order, left to right) 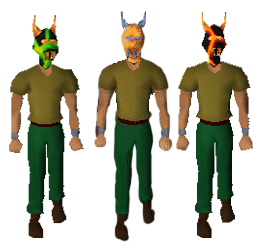 These three masks are new, custom cosmetic h'ween masks, with three of the most popular color schemes in DreamScape.

Retrieved from "https://dreamscape317.fandom.com/wiki/Ninja_Turtles?oldid=40648"
Community content is available under CC-BY-SA unless otherwise noted.