The ELO System is a new way of rewarding loyal DreamScape players.

Instead of the typical item or cash loyalty rewards, the ELO system rewards players by giving them a small stat multiplier, which increases with each 24 hour period that the player logs in and kills 100 NPCs.

Pictured is the ELO interface, accessed by the ::elo command: 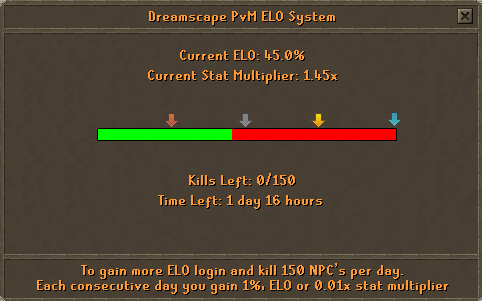 The system doesn't work off a universal timer, but rather the 24 hour timer restarts as soon as the player completes their 100 NPC kills. In the interface, it begins at 100/100 and counts down. Once it says 0/100, the player has completed their kills for the day.

The ELO will max out at 100% with a different max stat multiplier depending on your rank in-game.

Non-Donator and Regular Donator maxes at a 1.1x multiplier (10% bonus)

Retrieved from "https://dreamscape317.fandom.com/wiki/ELO?oldid=42194"
Community content is available under CC-BY-SA unless otherwise noted.